Sometimes I feel that given my medium, I should maybe be dealing with more serious subjects. Plastic Bags, although very useful for a lot of things, are very damaging as well. Images of overstuffed landfills, polluted waterways, suffering wildlife, and stats about the effects of plastic bags and other trash on our world are all super sobering.

There are many reasons that the concept of a “Dystopian”, bleak future has become a very accepted vision of where we as a species and a planet are headed. The facts and figures, come from the scientists, but the Vision itself comes from artists – from George Orwell to Mad Max, this dystopian concept has become a belief, and beliefs create self-fulfilling prophecies.

I support the scientists and artists, who are calling our attention to the destructive path that we are on, but I think so often the dire images and stats are SO upsetting that rather than addressing the problem, we choose to look away.  So for right now at least I am choosing to create some optimism. We don’t know for sure what the future holds.  1984 and Mad Max are fictions after all.

I would like to be part of a concept of – not a utopian future – but a “sus”-topian future, a future that practices sustainability, a future that is not perfect, but also not bleak, because people have found the fun and beauty in being more resourceful and less wasteful.  That would be a future you wouldn’t look away from.  That would be a prophecy worth fulfilling.  You can begin right now by paying attention to and supporting the artists, people, and businesses who are working in and on being sustainable.  --Because part of sustainability is not starving to death while you are changing the world.

Heather Fortin Rubald is a Colorado native who has been looking for possibilities in cast-away objects ever since she was a kid.  She hates to see things go to waste.  Heather currently resides in Loveland, CO. She began on a whim crocheting bulky beach bags and has spent the last several years experimenting with how far she can take the post-consumer plastic bag.

Her company, HFR Designs ltd, is committed to reusing 100% post-consumer plastic bags and other plastic sheeting, to create stylish, fun, and functional purses, bags, and other accessories as well as one of a kind fine art pieces.

​"When I started out  I was surprised to find that people have very strong feelings about the plastic bags they are using and inadvertently collecting.  The first person I showed my bulky beach tote was not only excited about the tote but also that she could give me her used bags and get them off her conscience.  Since then, I have added 'Community Recycling Activist' to my job description, and HFR Designs has taken on a life of its own collaborating with ARC Thrift Stores, Habitat for Humanity, and a wide range of individuals (some I have never even met) for much of the bag collecting. To date, HFR Designs ltd is proud to have kept over 55,000 (and counting) post-consumer plastic bags out of the landfills where they are extremely hard to contain and can take 300 years to break down." 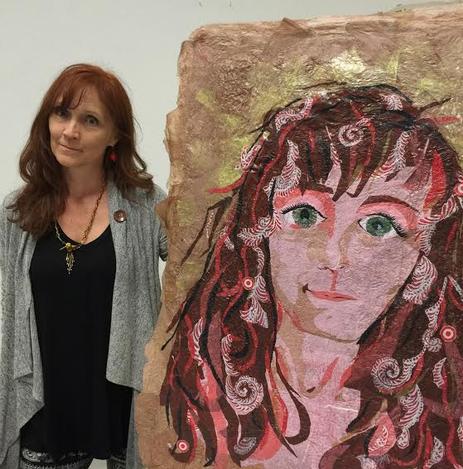